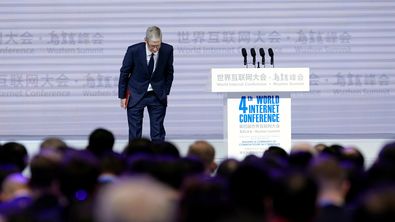 The conference caps a year in which the grip of China's internet censorship has only tightened: "In the past year, Beijing has shut down a handful of popular live-streaming apps, passed a law that forces foreign companies to store data in China, closed trading on its largest Bitcoin exchanges, and cut access to tools that help people access Facebook, Google, and other blocked services. Days before this year’s conference, it has launched a stunningly effective campaign to censor online discussion of mass evictions which have swept Beijing, rattling even ardent party supporters. Meanwhile, within the past month, Tencent, which actively censors content on the popular messaging app WeChat, surpassed Facebook’s market cap and purchased a 12% stake in Snapchat." says Josh Horwitz at Quartz magazine.

Apple CEO Tim Cook nevertheless felt that "The theme of this conference—developing a digital economy for openness and shared benefits—is a vision we at Apple share", and that “We are proud to have worked alongside many of our partners in China to help build a community that will join a common future in cyberspace.”

Josh Horwitz notes in a follow-up piece at Quartz that "Cook's comments come months after the company removed hundreds of apps from its Chinese app store that help consumers jump the so-called “Great Firewall.” In an earnings call last August, Cook admitted that Apple was “required by the government” to take the apps away."

"Strong proponents of internet freedom might quiver over this [attendance of top Silicon Valley bosses at the conference]" says Horwitz. "For the Cyberspace Administration of China (CAC), China’s main internet regulator and the conference’s organizer, the World Internet Conference marks an opportunity to seek public affirmation for China’s internet policies—which include rampant censorship and barriers on foreign competition. Getting on stage with China’s chief censors after a year that has seen unprecedented censorship can’t help but lend legitimacy to China’s increasingly closed internet, and render praise of “openness” hollow."